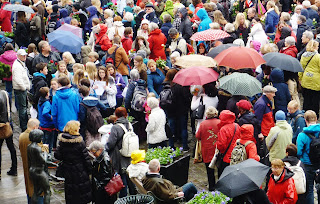 TV was showing "Babe in the city", where the little pig helps other animals to escape  from the pound. It is a story of how being kind and helpful makes everybody happy.

As the film finished, I suddenly found myself crying. Earlier I had been reading comments under the YouTube videos of Norwegians singing "The Rainbow children" on Youngstorvet, as a protest against ABB saying it was indoctrinating children in Marxist thought.  The kindness of the animals towards each other contrasted with the many hateful comments on the videos and made me cry, which surprised me.
http://www.youtube.com/watch?v=LGWKkGbGgEY&feature=watch_response

Flowers for the victims 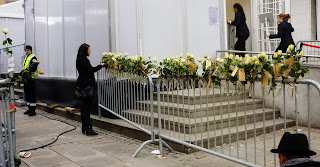 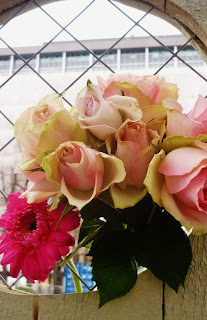 At the Law Courts

The trial of the Norwegian terrorist started its second week. Why is it that press and TV descend on us mostly only when something bad has happened.


We are dealing with a person whom most of us cannot understand. He can shoot dozens of teenagers at a   close range, often looking in their eyes, calmly calculating that those who try to escape swimming, are so desperate that they will drown.

He can close his mind to all the horror so he can tell in detail how he did the killing. He said that if he did not do that, he would not be able to  accomplish the telling.

Roses in front of  the Law Cours 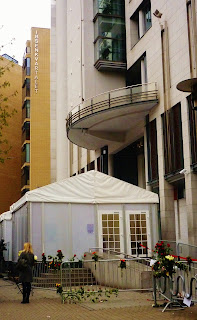 If he is not deemed insane, we have to invent a new name for his state of mind.
Posted by ausfi at 4:04 PM No comments:

So now it is the fifth day of the trial of Anders Behring Breivik (ABB). Norwegians like to use all three names, there is usually a first name, middle name and surname.
NRK shows in its daily TV program everything that happens in the court, with a column on the right showing questions and the answers by ABB.
He has been telling about some other planned terror attacks, which he gave up. He considers himself a victim, because, according to him, it was necessary to do the killings and he knew people would hate him for that. He regrets that he did not kill more people. He only cried seeing his own film he sent to YouTube: "because my ethnic group would die", he never cried for the real victims.
"According to the normal norms he is pretty crazy. He has created a fantacy world and his own universe which no arguments can bite", says Kjell Lars Berge, an expert on rhetorics.
If he cannot be called crazy, then we should invent a new word to describe him.
Posted by ausfi at 3:19 AM No comments: