It is possible on Flickr to "follow" people whose photos you like, usually you click on the "follow" button on the person's photostream
and they get a message: "So and so is following you!
If you don't know So and so, So and so is probably a fan of your photostream or wants a bookmark so they can find you again. There is no obligation for you to reciprocate, unless you want to."

They used to be called "contacts", which many still think is a better term, some tend to feel follow has overtones of being stalked.
People used to have under 500 contacts. Last year for several reasons it became easier to add lists of people as contacts. The limit of their number used to be 3 000, some time ago Flickr raised the number to 100 000! That is mostly because some people started following even that many people. It seems that some even delete those contacts so thy can then add new people.  I still get these messages and they are usually from people who follow at least 30 000 people. Some people block them, I just do not reciprocate. I do not know my reasons, maybe I'm jealous of them as they usually have huge numbers of views and faves :-) That is supposed to be a joke.

At the top is a section of somebody's list of people they follow, as you can see they are all people starting with the letter k. So I just wonder if they have even seen any of the people's photos as they have just copied the list from somewhere.

The idea was to see and enjoy the photos you like, how is that possible if you follow 100 000 people, it would be impossible time-wise even to see one photo of each!

Are we just lucky? I woke up today in Helsinki hearing loud thunder, but I guess I was tired as I seemed to have fallen asleep again quickly.
When I got up and looked at the news, I found out that Friday was supposed a very thundery day, somewhere else it had rained so the streets were awash. But what I heard was the front passing Helsinki. There was also hail, so big that it broke peonies in a garden in Heikinlaakso.

It,s about half past 1 and the sun is shining, but maybe I'll take the umbrella!
Posted by ausfi at 4:51 AM No comments:

Flickr just rolled out most of the extensive changes it has been preparing for months.
Some are happy about them but of course there are huge numbers of people who dislike them. Except that the word is too mild for most of them to use, it is usually: "I hate it!""Remove it immediately!" "Go back to the old one." I understand that people have different opinions and tastes but do some really expect that after so much work ( and I really think most new things are good) Flickr would just abandon all because some of probably 8 million members demand it. Immediately!?

One new thing is the Camera Roll. I think it should have some other name as it has already been the name of an extension in iPhone, I think.

The Camera Roll can only be seen by the owner of the account, You need not use it if you  'hate' it. One problem is that it has been put in 'You', a  drop-down menu. I usually hover over it and just click on whatever I want, but some have to click on it and then they get the Roll, which is in the first position. The  first used to be  photostream, which most people want.

The Camera Roll has all your photos as thumbnails, in the order they were taken. That way it is easy to delete duplicates, which you easily get if you have many photos.

Here are some dissatisfied customers, The first one had not noticed that he should himself have disabled it in the beginning. It is a bulk upload that many people had asked for, but it uploads everything on your phone. He can control it with no problems.

"I discovered that Flickr was automatically uploading photos from my iPhone to the Flickr Camera Roll. I have disabled uploading to Flickr on my iPhone and deleted the photos that were uploaded yesterday (most of them were duplicates of photos that i'd already posted to Flickr and put in Albums).I use my Flilckr page to show photographs that I want to show, not as a dumping ground or backup for every photo that I take"

The next one has a way with words, though there's some  tautology.

I'm happy someone is thankful.

"I like the new Flickr! It was amazing that I found today my photos also in views (collections) of e.g. buildings, flowers, weddings, winter, frost, sceneries, trees and birds. I also know that you are working hard there to meet all the needs every critic is giving you. Well, that´s good since people think differently. Keep going!

This was the worst story I saw, just shows you must know what you are doing and be careful.


Camera Roll confused me and I ended up deleting most of my photos. Dunno what to do. I'm thinking of quitting altogether. I thought this was something my phone autouploaded through the Flickr app.(Please disable this!!! It's like stealing people's phone photos. This is horribly invasive and disappointing. Reminds me of Facebook privacy stuff in the past which hurt their reputation.) I never saw it before so I thought it would be safe to delete it. Boy was I wrong! Deleted all my photos. No thanks for the freakin layout change. I'm so pissed off right now. Who made these stupid freaking decisions??? And like most websites, this should have been a tester not a forced roll out. Did I not see the option to not go beta? I am kicking myself and crying in pain for doing so.


That was really bad and I feel for him. But of course it had been tested, but just in a smaller group. 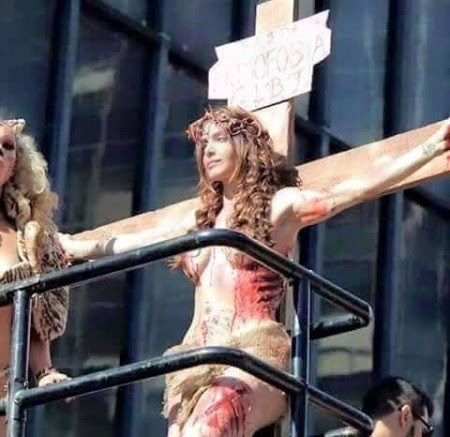 "2 million homosexuals flooded the streets and performed a mock crucifixion of Jesus. A transgender actress played the part of dressing up like Jesus, being whipped until she bled, and then being crucified. - See more at: http://truthuncensored.net/2-million-homosexuals-flood-the-streets-and-preform-mock-crucifixion-of-jesus/#sthash.ZJmt9c8E.DBVBQFzD.dpuf"

I wrote this in the Truthuncensored.net:

I have had and have gay friends that I respect and like, so I will wait for the Lord to tell me the reason they exist, but I only know that God has also created them, so I will not hate my friends.