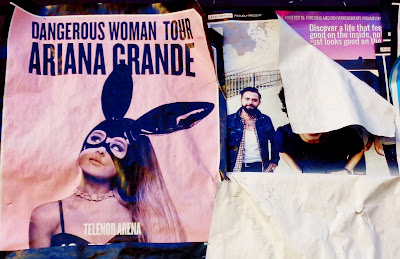 Just before the funeral of Mauno Koivisto there was another terrorist action, this time in Manchester, England, where 22 people fell victim to a suicide bomber at Manchester Arena. This happened immediately after Ariana Grande's concert. She will be returning to give another concert for the victims.

I was taking photos at Gamlebyen and was returning to the centre, when I was passing a billboard full of  concert posters. There was one for Ariana Grande. I felt I had seen something connected to her. Death? Her Death? I decided to take a photo. Soon after I found about Manchester.

Soon is the start of Ramadan,


ISIS calls for ‘all-out war’ to mark start of Ramadan by attacking ‘innocents and civilians in their homes, markets and roads’ after Manchester bombing.
They certainly are twisted,   wanting to kill everyone who has not converted to their faith. When will something happen  in Norway?  They say innocents and I don't know what they mean with that. Who would want to kill innocents? I think they are getting more and more desperate partly because of  the threats of  President Trump.

The funeral of President Mauno Koivisto

President Mauno Koivisto's state funeral was on Thursday. The Koivistos had been married for 65 years.


"Over 30,000 people lined the streets of Helsinki to watch the funeral procession of President Mauno Koivisto on Thursday, according to the Helsinki Police Department.
Koivisto, born in Turku in 1923, served two terms as the President of Finland in 1982–1994, guiding the country out from under the shadow of the Cold War into the European Union. He passed away at the age of 93 at Meilahti Hospital in Helsinki on 12 May, 2017.

He is widely credited for ushering in a new era of parliamentarianism in Finland by actively reducing his own powers and enhancing those of the Finnish Parliament.
“A great Finn has departed from our midst,” President Sauli Niinistö summarised in his eulogy at the Helsinki Cathedral on Thursday. “He has left us, but remains close to us. In terms of his ideas, ways, values and principles, he is still with us.”
“President Koivisto’s uniqueness did not lie in the fact that he knew the people, but that the people knew him,” said Niinistö.
“His thoughtful, deliberative way of approaching issued brought the ordinary citizen close to the statesman, perhaps closer than to any other in Finland’s history. Mauno Koivisto’s pithy, sharply analytical and often humorous remarks remain embedded in the essence of what it is to be Finnish. They reflect a way of thinking, principles and values that still affect our actions and deeds.”
"Koivisto’s final journey took him from the Helsinki Cathedral to the Hietaniemi Cemetery, where he was laid to rest close to predecessors Risto Ryti and Urho Kekkonen.
Koivisto also served twice as the Prime Minister of Finland in 1968–1970 and 1979–1982, as the Minister of Finance, and as the Governor of the Bank of Finland. He is survived by his wife of 65 years, Tellervo Koivisto, and daughter Assi Koivisto-Allonen.
His funeral was the first presidential funeral to be held in the country since that of President Kekkonen in 1986.
Aleksi Teivainen – HT"
I wrote thus in Iltasanomat: "Thank you, Iltasanomat, for the well-written articles, the photos and videos. They made it possible for those who live in Norway, also take part in the solemn occasion. When Sibelius was taken to his resting place, I was one of the honorary guard of students with their white caps lining the streets. Then also there were multiple rows of people on both sides of the streets.


The speeches of President Sauli Niinistö and Bishop Emeritus Eero Huovinen were moving, the Bishop was wiping away his tears.

I was close to President Koivisto and his daughter when they visited Canberra in the eighties. There was a lunch or coffee at the Finnish club and anybody could get close to them, even to take photos."

I have a slide I took of them, where both happen to support themselves on the table with the same hand on their chin.

Here Mrs Koivisto throws the red rose on the coffin, Bishop Huovinen watching, the choir Ylioppilaskunnan Laulajat at the back. 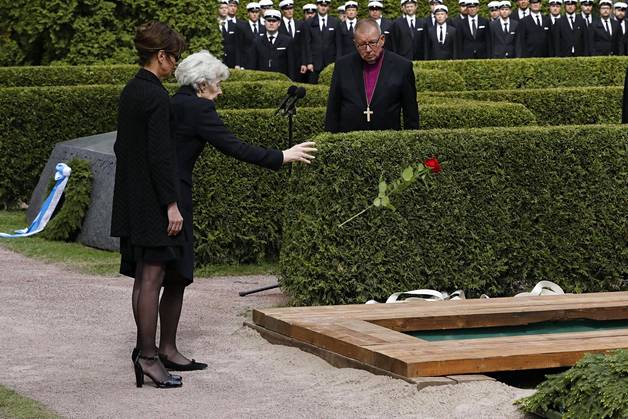 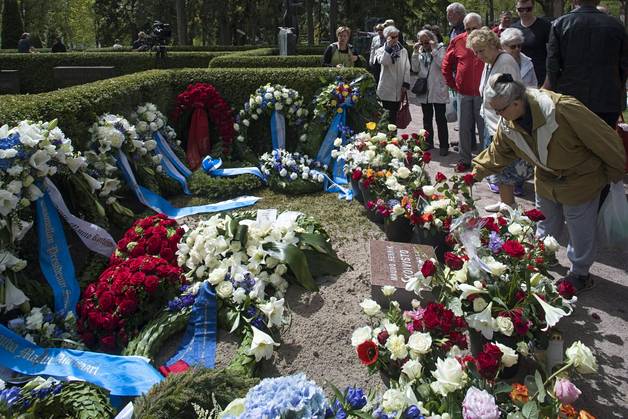 There is a continuous flow of people to President Koivisto's grave, both young and old, many want to take photographs.
Posted by ausfi at 4:29 PM No comments:

Liberals and the others

This is slanted reporting. She was not pissed off, she did not know what to do with the large box as she knew photographs would be taken just then. President Obama himself took it inside.


It is so sad to follow YouTube videos, where you can see the hatred between the Republicans and Liberals, though I feel Republicans show most hate. There must be many racists among them the way they write about President Obama and Michelle. "A chimp in heels"."Looks like a man". Calling both of them with distorted names. Fortunately there are many who loved and respected them.

Then the Liberals are equally horrible towards the First Lady. Much of it seems to be because she is a foreigner and they pretend that they do not understand what she says. Actually she has improved a lot.

Then there is the exaggerations, like in the following:

"I ADORE MELANIA AND HAVE MUCH RESPECT FOR OUR FIRST LADY AND PRESIDENT TRUMP. I AM 67 YEARS OLD AND THEY ARE SO MUCH LIKE PRESIDENT KENNEDY AND JACKIE. WE FINALLY HAVE CLASS , DIGNITY BACK IN OUR WHITE HOUSE."

Sometimes Liberals too are so stupid. Now they make a lot of noise as it seems that the First Lady slapped away Trump's hand on the tarmac. It is on various videos. When I watch it in slow motion, his hand is all the time in the same position. When she notices that he is reaching for her hand, her hand reaches for his but just then he gives up so both hands fall away at the same time.﻿ I cannot understand people who enjoy it so if they think there is something wrong between them. Whatever her past, they should respect her position at least, also I have not seen her say or do anything wrong, even the copy of Michelle's speech was the speech writers fault.

Michelle Obama and her husband had and have class and dignity, that is nothing new. There are those who understand that.


After Obama's speech at the Kennedy Centre: "A total class act. I feel so sorry for those who can't understand what an exceptional human being led this country as President for eight years.﻿
86"

"Connie in the Sun1 week ago
I miss not having a buffoon in the WH. President Obama as always, gracious, articulate, eloquent and always expressing appreciation towards a wife that he truly loves and cherishes.﻿
52"
Posted by ausfi at 12:16 PM No comments:

What a great talk! A man born without arms or legs, who has made a life for himself and is even going to have a child. When you listen to him, occasionally your eyes get some moisture but most of the time you almost laugh or at least smile, because he really does give you hope. You would expect you heart become heavy, but it gets lighter. At least it makes me happy with what I have, I just have different things to enjoy than he has. 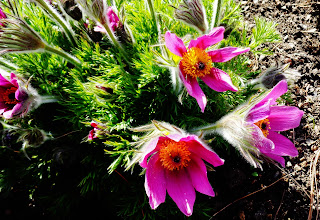 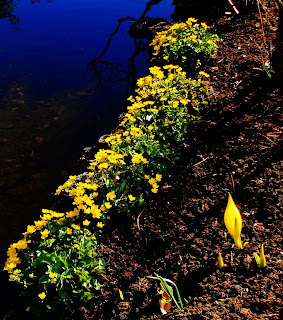 We have had a beautiful spring here, and why worry about USA, but so many things have been happening.


President Trump has fired FBI Director Comey, having lost confidence in him. He was full of praise of  Comey  at the end of his campaign. They got Conway to answer Anderson Cooper and there came the 'alternative facts' again. When Anderson talked about the White House being under investigation, Conway denied it. Great eye rolling from Anderson.

Anyway , a couple of great comments:

"All this did was show all Americans with half a brain that Trump is scared! Shits about to hit the fan in Washington. Why else would Trump fire a Republican FBI director. Trump MUST know how bad this looks...how corrupt it looks when you fire the person investigating you for treasonous behavior...YET HE STILL FIRED HIM! He's scared shitless about something that was uncovered and he's proactively trying to discredit Comey by getting rid of him.﻿"


"When she talks, you just know you're gonna get a bunch of bullshit dumped on you. It never fails! They will NEVER say it's because Trump wants people he could control when it comes to investigating him. It's not hard to see @ all. This is the most corrupt administration ever in American history. Republicans are pulling off the mask and showing America what their true intentions are. We MUST vote all these people out who aren't worthy of representing us. Take the blinders off because they've taken off their mask. It's VITAL people!﻿"

"Trump claims that he has fired James Comey in order to restore confidence in the FBI. That is ridiculous. By firing someone who is overseeing two ostensibly independent investigations, the Trump administration carries on its pattern of stifling anything that does not whitewash Trump. Anyone who becomes the FBI director after this will be derided from the outset as a Trump tool. Trump can issue all the friendly statements he wants. This has too many of the hallmarks of a political hatchet job.﻿"

It might still take time before we get a new director, Bernie even thinks the number of people voting for the new one should be raised to 60 from the present 50. So many questions at the moment, one of them: did Trump lie or did Comey lie about Trump  asking him to let the investigation of Flynn go?

And of course there is voting to accept the Trumpcare, 24 million Americans losing their health care, it is expected many to die as they cannot afford their medication. But the republicans don't care, or not very many.
Posted by ausfi at 9:43 PM No comments: