It is interesting how small things can bring pleasure to people. Yesterday night I  took a bus from the city after 10. The bus was almost full. Next to me coming in were two African-American ladies, could have been British.  The first one got a seat next to a guy, facing the back. I took a seat behind her, facing front, as I was older than the other one coming in after me. After a few stops the man next to me left. So I got up and said: Would you like to sit next to each other? Of course they did. When we were seated, I heard one say: Was it not nice of the lady to change seats? Yes, answered the other and they thanked me. So a small thing gave pleasure to three people. And probably to an African guy unconnected to us, because he was smiling.

A funny thing happened a bit later. Next to me on the window side was a young man listening to music through headphones. He was also very tired. So gradually his head got lower and lower, in the end resting more or less on my shoulder. When that happened the second time, a young couple started laughing and said: Så koselig! (So cosy!) I smiled too. He changed his position so it did not happen again.

Below is a bus just leaving my busstop in Linderud. 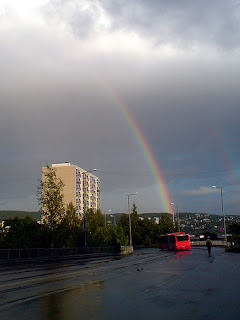