I remember the beginning of one June long ago, I do not know why I think it was 7th of June. I cannot have been much over 10. I was running to a shop, the first time without a coat. I was thinking how wonderful it was that it was summer at last.

Nowadays, like this year, it is often warm halfway to May. This year it got really warm, 23 to 24 degrees Celsius. on 25th of May. On Friday, after two days, it will be June. It is already much colder,the night two days ago, it was 0 degrees.

The spring was ery early this year, the leaves started to grow in the birches a couple of weeks earlier than usual. I love so much the gentle green of the young leaves.

Watching the giving of points. I love Estonia and Malta and of course they are not getting much points at all. Sweden is still on top but Azerbaijan get so many again. Serbia is second when half of the countries have voted. Again Slavic countries are giving most points to Slavic countries. Serbia at least has a good melody.
Later. Sweden the great winner more than 80 points over the Russians. Good but more because of the performance than the music. It is often said: 'The melody is soon forgotten'. I cannot remember Sweden's, would never had happened with ABBA's songs.
Poor England and Norway are the last with 8 and 7 points. But then Finland did not even reach the finals.
Posted by ausfi at 3:45 PM No comments:

Outside a petrol station there was an advertisement showing four different kinds of Royal Ice cream. There were quite  large letters saying "Royal-is, halv pris,  11 kroner". There was some text underneath and on top, with much smallet letters and not as clearly written. On top I read something about  a coffee provider.
So I went in, took an icecream from the box and gave it to the cashier, who said : 22 kroner.
But it says: half price, said I. Yes, if you buy a X coffee, it's an offer by them. Well, I paid and took it, as it was my own fault, not reading the small letters. I should have read everything. And now I noticed behind the colourful icecreams a white paper coffee mug partly hidden. 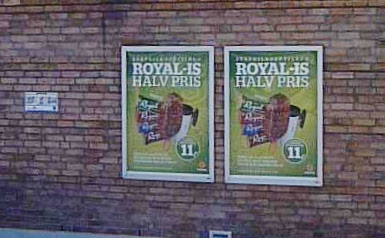 I took a photo of the advertisement, so I could read it later, and noticed at home I had moved the camera so the white text could not be read.  When I went to take another photo later, they had just changed the advertisement! Was it deliberate, was their purpose to mislead the customer?
Posted by ausfi at 8:06 PM No comments:

I sometimes wonder about TV writers. I was watching "Numbers". An ambulance driver is suspected driving patients who are receiving illegal donor parts. The agents go to the ambulance garage to ask after the driver. They are told that he is just driving the ambulance in. So the agents turn and start gesticulating towards the driver. Of course he turns the ambulance and tries to escape. Would the agents really be so stupid as not to wait until he has left the ambulance and has perhaps come to them?
Posted by ausfi at 6:07 PM No comments:

On the TV, there's an information part which gives you a few facts about any film which is shown. Sometimes there exist two films with the same name. Today the film is "Ghost Town". The information gives this as a film, a comedy about a dentist (Rick Gervais), who can talk to ghosts, from 2008.
Of course it is nothing of a kind. ThisGost Town is a horror movie, a TV movie from 2009, by Andy Briggs, directed by Todor  Chapkanov.