Four days before I was leaving Finland where I had stayed for three weeks, the authorities in Norway found out that four Islamic terrorists were attempting to arrive in Norway. On 1. March some members of the IS group had attacked people with swords and maces on a train stop in China, killing 29. Four from this group were on their way to Norway, the idea was to create fear and loathing among people by knifing people.

Arriving at Oslo airport I did not see any police with weapons, like photos in the newspaper showed. I had left my keys with my daughter and she was at work. I took the train from  Gardermoen. Arriving at the main railway station I went towards the left luggage lockers and they were unavailable, with barriers blocking the way! Time was not even 1 o'clock and my daughter would leave work at 5. It was like in New York, as since the terrorist attack in New York in  September 2001, all public luggage storage was closed.

I had the largest  luggage bag with a handle, so called rollaboard, which by the way  were invented in 1987 by US pilot Robert Platt:  I would have to stay with it. For a while I stayed on a bench at the railway station and could see others with luggage problems. Then I thought it might be better to be outside. I could not move far so I went and sat at a square between a hotel and tramway tracks on the opposite side of the street from the station.

It was amazing how quickly some four hours went,  just watching people. I read a bit and ate something I had brought from Finland,  otherwise I was just observing what happened. I did not even move anywhere.

In 2011, a soldier and a policeman with guns in front of the Parliament, and as we found out, it was home-grown terrorism. 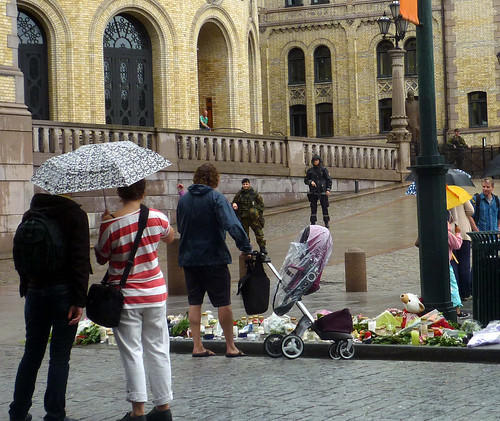 Is one not supposed to know anything about one's ex? Counting with my fingers, I get number 19 when I count how many years we have been divorced. Such a long time. Of course I know where he lives, how old his daughter is and so on. The only connection we have is  that we write Christmas cards, with a couple of nice sentences. There is no animosity, but we could probably not be able to chat  like old  friends.

The other day my daughter and I googled his name. After a while we get to a site where there is an article on him  in Sydney Morning Herald and he's called professor! Happened last year. He has a university chair! There is also a photo, and we exclaim:  Who is that distinguished gentleman? We are quite happy, at last he's got recognition. I will address the next Christmas letter with 'professor'. But even my son had not thought of telling us.

Mine to reason why

Flickr is a great site to make friends, I thought I had made one who seemed to appreciate me. Then one day I found out that they had blocked me. Of course one wants to know why. You cannot contact them so I tried to ask by writing just : why? without a name. I also asked a friend. He wrote and asked and got an answer of a kind. They had thought I read their blog and had understood. I had not read it but when I went there, I still did not understand. They disapproved that I had used a go-between, called it 'harassing' both. Is one really not allowed to know why!

Later they wrote:  "I shall sever every connection with those who favour my foes etc".  On Help Forum, I had answered one who probably was a foe, but there was no 'favouring' in it, there were no friendly words in it. They answer him too. It could be something else but I have not found anything. They also wrote: "I shall not enlighten her about my true identity."  Everyone gets the same respect from me, high or low.

I was upset at first; even cried. But then I thought: "Why to be upset about  losing a 'friend' whom I had not even met!

Will this be for ever?

In 2015. The block has been removed, but I have not dared to use their real first name as I do not know whether we are friends any more.